The next morning we took the opportunity to go on a morning game drive to the Chobi National Park. We had an early 4am rise to be ready for our drive with Gomez who was going to collect us at 5:45am. We had a quick breakfast packed our gear and with three other passengers found a spot on the safari vehicle. We entered through the Gavundu gate for a 3 hour drive which luckily for us turned into 4 hours. We spotted a large variety of birds and animals. 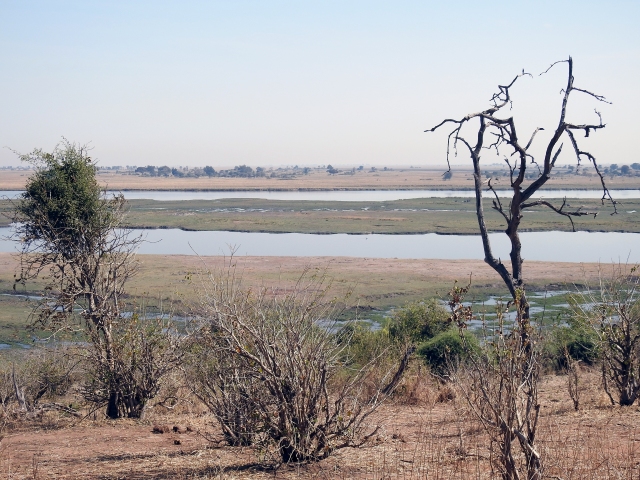 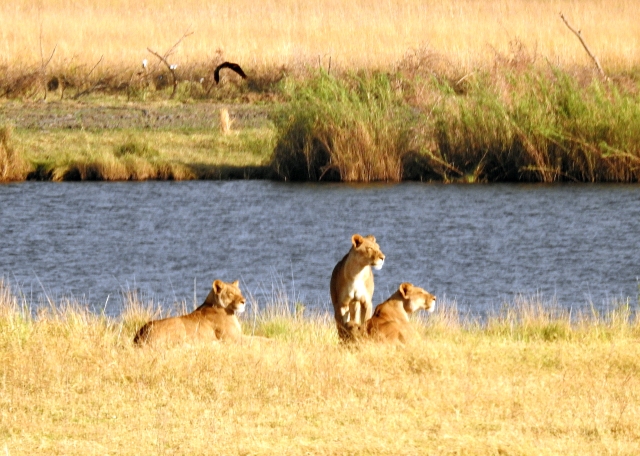 Lions basking in the morning sunlight 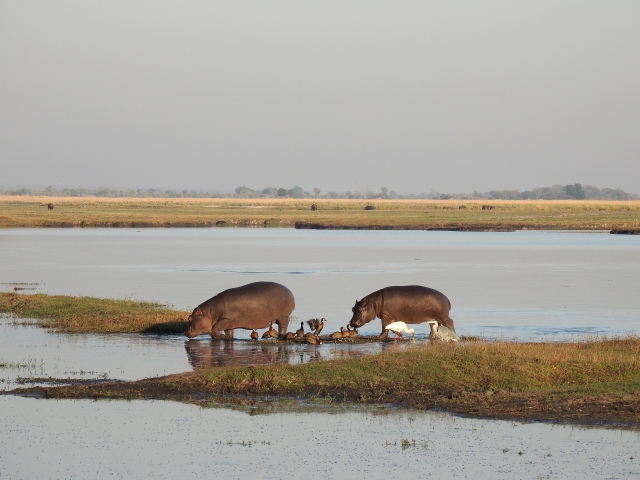 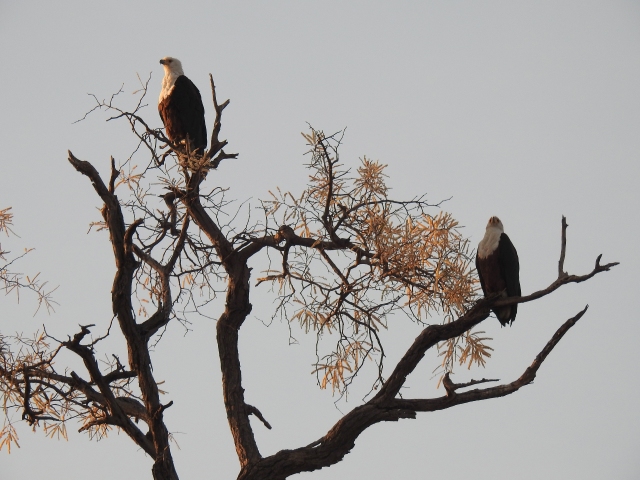 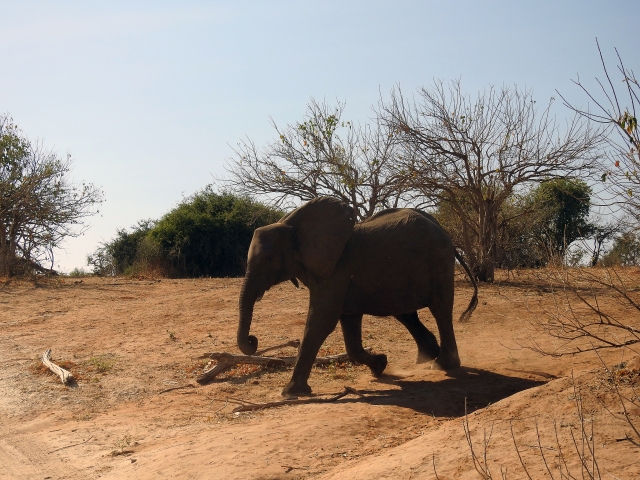 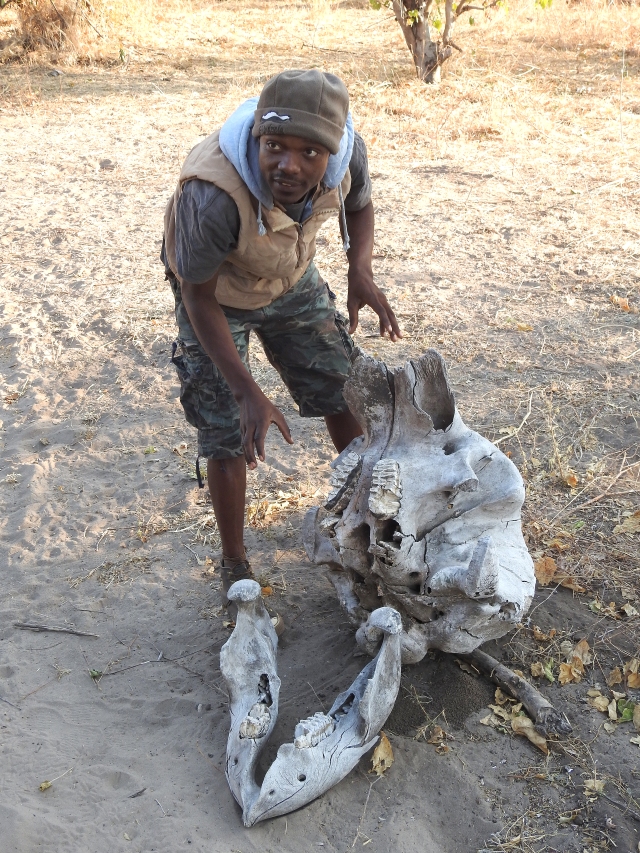 Gomez showing as a skull

When we stopped for a ‘pee’ stop and a coffee there was a troop of baboons surrounding the ablution block. Gomez shooed them away from the building so that we were free to enter. He warned us on our return to keep an eye on the vervet monkeys who had by now gathered around the vehicle in anticipation of possible invasion and theft. 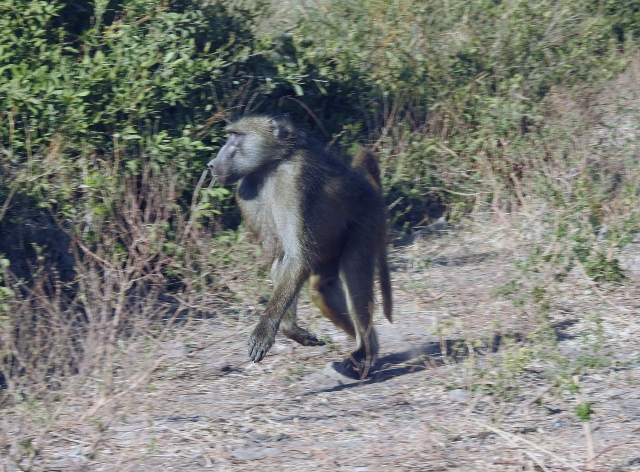 Baboon on the move

On our way back to the safari vehicle one of the male passengers on our tour took great pleasure in telling us he had filmed the monkeys breaking into the vehicle by opening the back glass sliding doors, gaining access to the picnic box and stealing our morning tea biscuits! We all gathered round to watch his video and witness the perpetrator in action! We were all looking forward to our morning snack! 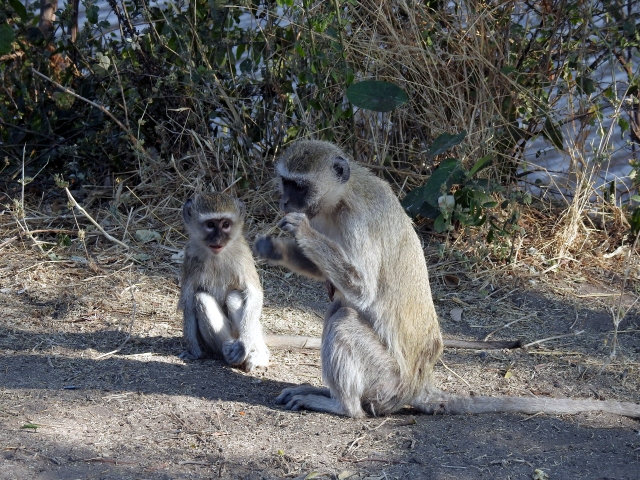 While we were enjoying our mug of tea/coffee I spotted one of the monkeys jumping onto the vehicle to see if there was anything else he could steal. I tried to ‘shoo’ him away and in a flash he jumped from one side of the vehicle straight towards me in a very threatening manner bearing his teeth at me. I beat a hasty retreat. I soon discovered that male monkeys do not take kindly to being challenged by a female of any species! He did not back off until Gomez intervened. By now we were surrounded by a family of monkeys who gathered in the nearby trees and around the vehicle enjoying our biscuits and anticipating their next break and enter! 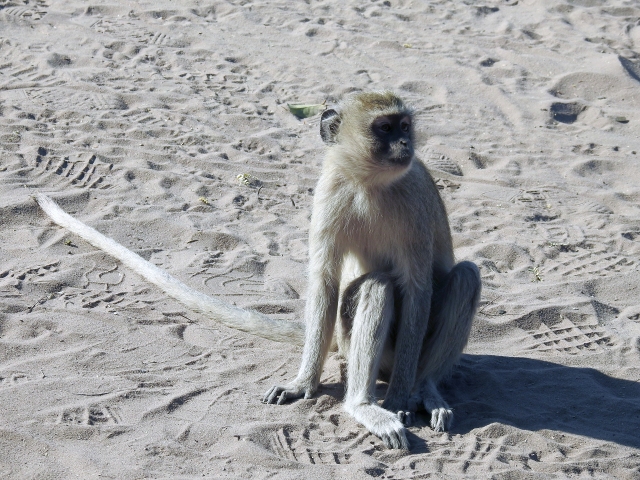 The cheeky vervet monkey that challenged me 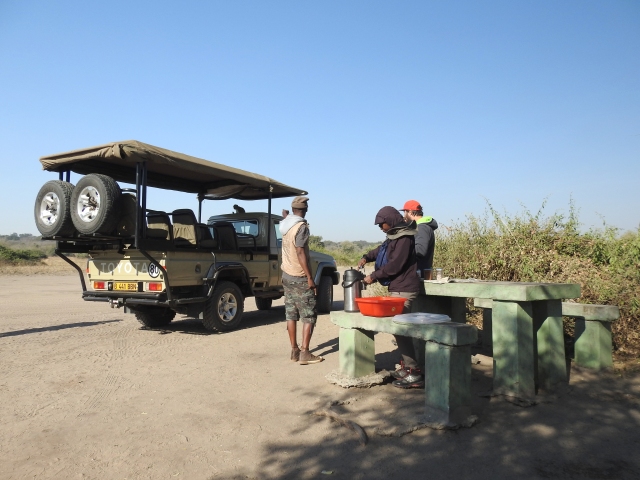 Time was now ticking on and we needed to head back to the gate. We had a very rushed and bumpy ride back and as we hit a huge ditch we all went flying including David’s ‘Big Bertha’ camera which crashed onto the floor with a thump . When he managed to retrieve it he discovered that the lens filter was chipped. Luckily it wasn’t the lense. “Not happy Jan!”

We arrived back at Elephant Trail at 10 am and were packed, checked out and on the road by 11am after refuelling and buying a few nibbles for the road.

On the way to Nata after about two hours driving we stopped for lunch under the shade of a lovely tree and enjoyed Russian sausages, lettuce, tomato sauce and an iced tea purchased in Kasane.  We resumed our journey  passing large millet fields. When David spotted a large harvester in progress we had to stop to take a few photos. We were also stunned to see ground hornbills feeding on the side of the road. We were so lucky to spot them and of course had to stop for a few quick photos before they flew off. 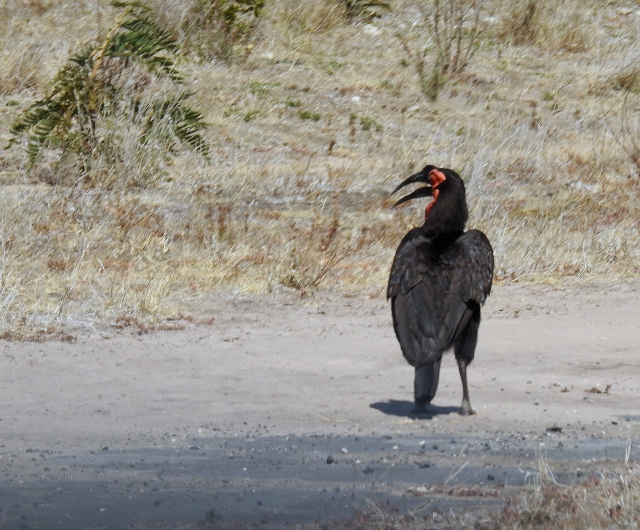 We arrived at Northlake Lodge in Nata, a very small town at about 2:30 pm. The Lodge is situated right next to the service station.  As we arrived at our destination fairly early in the day, while checking in, we enquired what there was to see in the immediate area. The receptionist told us about the Nata Bird Sanctuary in the Makgadikgadi Pan about 20 kilometers south of  Nata township. After quickly unpacking our gear we headed off not wanting to waste a minute of the day. This particular stretch of road between Nata and the bird sanctuary was possibly the worst that we had encountered so far. The potholes were horrendous. In fact most of the tar was gone and just pitted road rubble left. The vehicle travelling in front of was  swerving drastically to miss the ever-increasing potholes. I thought I was going to fall apart.

When we finally reached the reserve it was such a relief to get off the ‘surfaced’ road onto just ‘normal’ corrugations. At the gate and small reception building we paid $20 AUD for the entry permit. While in reception we met Stephen, a guide who was taking a female American tourist to the same place we were heading for which was the lookout viewing platform. The platform was pointed out to us on a very basic map supplied to us. Stephen and his guest left  shortly before us and we followed.

Our first sighting was two lovely ostriches strutting over a barren pan. Very striking, against the stark terrain as walked off  into the distance fluffing their feathers. While we were taking photos, Stephen approached us moving in the opposite direction. It appeared he was lost and couldn’t find the platform and stopped to ask us for directions! We told him to follow us and said that if he ever needed help with guiding he should just call us. He wasn’t amused! 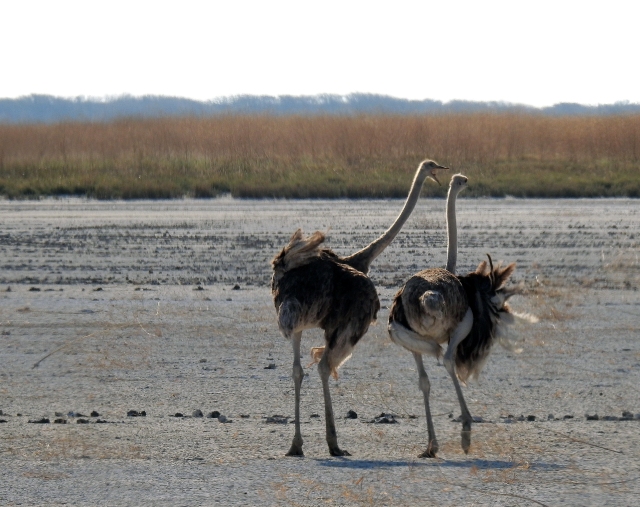 We drove quite a long way and suddenly there it was, a sea of water. I expected dry salt pans instead so this was a total surprise. It looked like a flat ocean as far as they eye could see. Positively stunning! 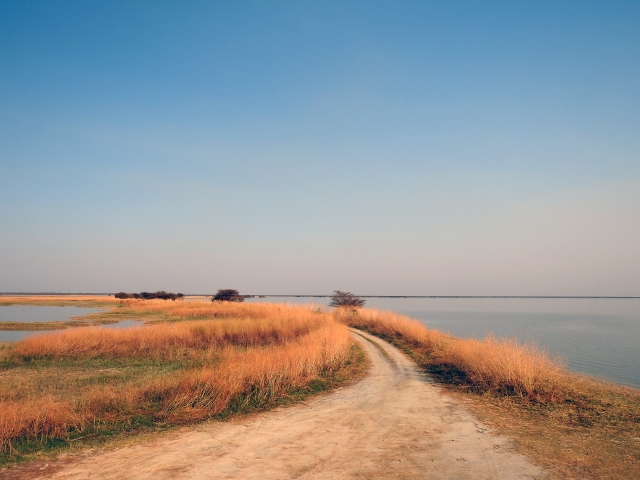 We drove a little further and came upon the viewing platform where we planned to settle down for a quiet afternoon of bird watching. Wrong! The next moment two bus loads of tourists arrived and the place was crawling with humanity. Luckily for us they didn’t stay too long and we relished in the sheer peace and tranquility that settled in to every pore of our bodies. Unfortunately there weren’t many birds at all. A lone pelican, a flamingo fly by and a few smaller water birds in the distance. The day came to an end but not without a spectacular African sunset. First stunning pinks filled the sky subtly changing into bold orange then morphing into subtle mauve and finally settling into subdued blues. A perfect end to a long but joyous day. 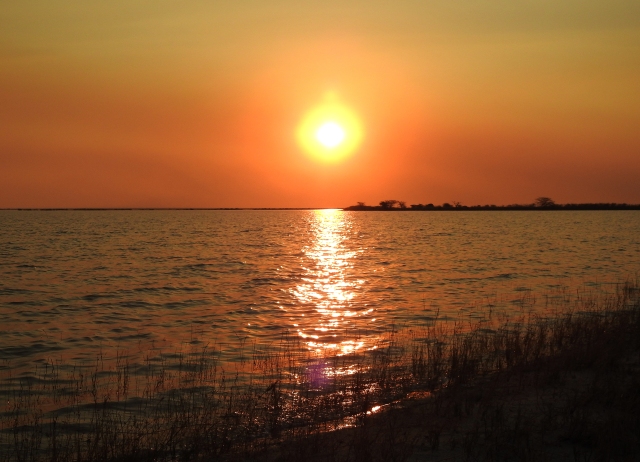 The setting sun over the salt pan 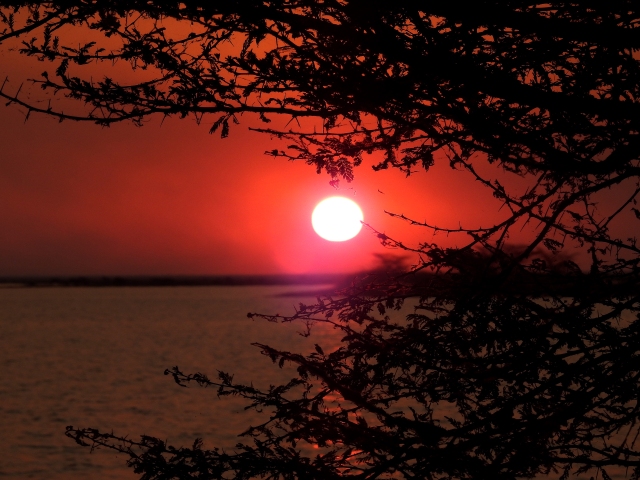 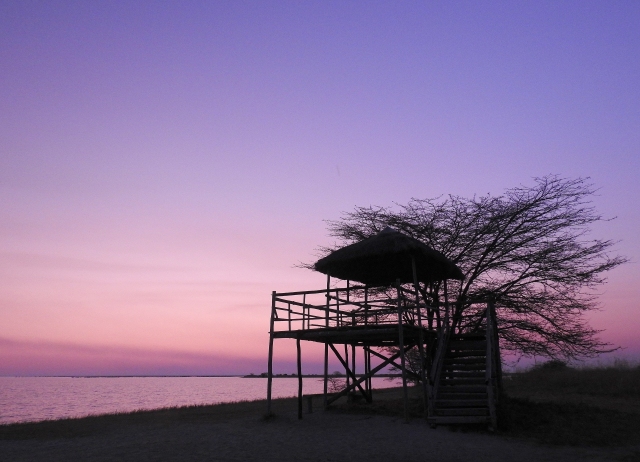 Last light at the platform

After the sun set and the night air settled in a silence fell over the landscape. The darkness fell like a blanket over the area and we couldn’t see a thing. The mosquitoes arrived soon after so we climbed into the car and nibbled on what leftovers we had by torch-light. Having run our supplies down gearing up for the next leg of our journey we didn’t have much choice,  a few crackers and whatever we could find to put on them. Eventually the stars began to twinkle like diamonds. Soon after we headed back to Nata hoping to get back to the gate in time. On the way back we spotted a beautiful little owl in the middle of the road and a couple of rabbits. The journey back to Nata was uneventful other than dodging potholes in the dark which was quite a challenge. David drove and I was the spotter!

Back in Nata and safely in the room I had a quick shower first and then it was David’s turn. Unfortunately the shower head fell off landing on his head! The shower then proceeded to continually drip all night! Nothing worse than a dripping tap however with our mosquito nets spread over our beds and snuggly tucked up, sleep finally took over!